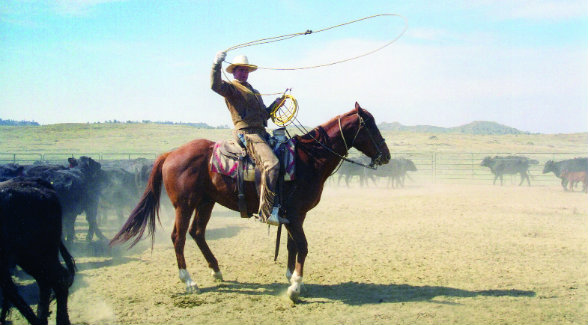 In 1864, a gold rush town on Grasshopper Creek was hastily crowned the first capital of the Montana Territory. Called Bannack, its reign as first city quickly came to an end when the gold played out. Not 100 miles west, another lode was found near Virginia City. Folks left, and Bannack was downgraded from capital to cowtown. They figured Virginia City was the place to be.
Today, what remains of Montana’s first territorial capital is a wonderfully preserved ghost town – and a mighty nice state park (www.bannack.org). Sixty venerable structures can be found “… in Beaverhead County, on Grasshopper Creek, approximately 11 miles upstream from where Grasshopper Creek joins with the Beaverhead River south of Dillon.”


Those are grand directions if you’re on horseback, but that’s what this country is all about. And if horseback country is where you belong, your dream ranch sits about three miles from Bannack’s empty saloons.
It’s called the OW Ranch, and it’s about 50,000 acres (32,428± deeded) of prime horse and cattle country. Located on
Hanging Woman Creek, the OW is an easy one-hour drive from Sheridan, Wyoming.
The OW is owned by music industry legend Jim Guercio. Guercio is best known for founding the Caribou Ranch – a recording studio where Chicago, Elton John, Michael Jackson, and countless others cut some of their greatest albums in the foothills of the Colorado Rockies west of Boulder. More recently, Guercio has lovingly restored the OW to its original glory when it was owned by John Kendrick, Wyoming’s ninth governor.
Guercio brought in Montana architect Jonathan Foote to renovate the historic ranch structures to the standards of the Kendrick Cattle Company. From the restored bunkhouse with its fabulous raised wooden porch to the massive barn with its enormous cottonwood beams and wooden saddling floor, Guercio and Foote took great pains to keep the original feel and footprint of the headquarters intact. The ranch looks and feels like it came right out of your favorite western movie.
Guercio has also worked feverishly to maintain the tradition of the region’s horse and cow culture. “We have a true horseback outfit here. All gatherings and brandings are done on horseback. The OW can carry 1,500 animal units and includes 2,000 acres of dry land hay and creek bottom meadows,” Guercio tells me via satellite phone. “For me this place represents the West as it was – and as it should remain.”
During the 1990s, Guercio would host a group of “significant Westerners” who would come from all parts of the globe to brand during the late spring. “We had quite a branding crew – the late CAA artist Joe Beeler, Canadian singer/songwriter Ian Tyson, saddlemakers Chuck Stormes and Chas Weldon, along with all sorts of locals. It was a great time to catch up with old friends and see a bunch of range teepees in the front yard,” Guercio says.
Rangeland on the OW is mainly comprised of gentle foothills with scattered timber and meadows in the many valleys. It is precisely what a Montana ranch should look like, and Guercio is rightfully proud of what his passionate investment has created.
“This is a place where for me, time has stopped. It’s place where good cowmen and good horses can work stock in a traditional manner on land that simply was made to run cows. If there is a cowboy heaven on earth, this might just be it.”
Text & Photography by William C. Reynolds
RESOURCES

Ready to Run: Current listings where you can saddle up.

By Eric O’Keefe One of the country’s premier listings, …

Rayonier (RYN) has signed an agreement to acquire …