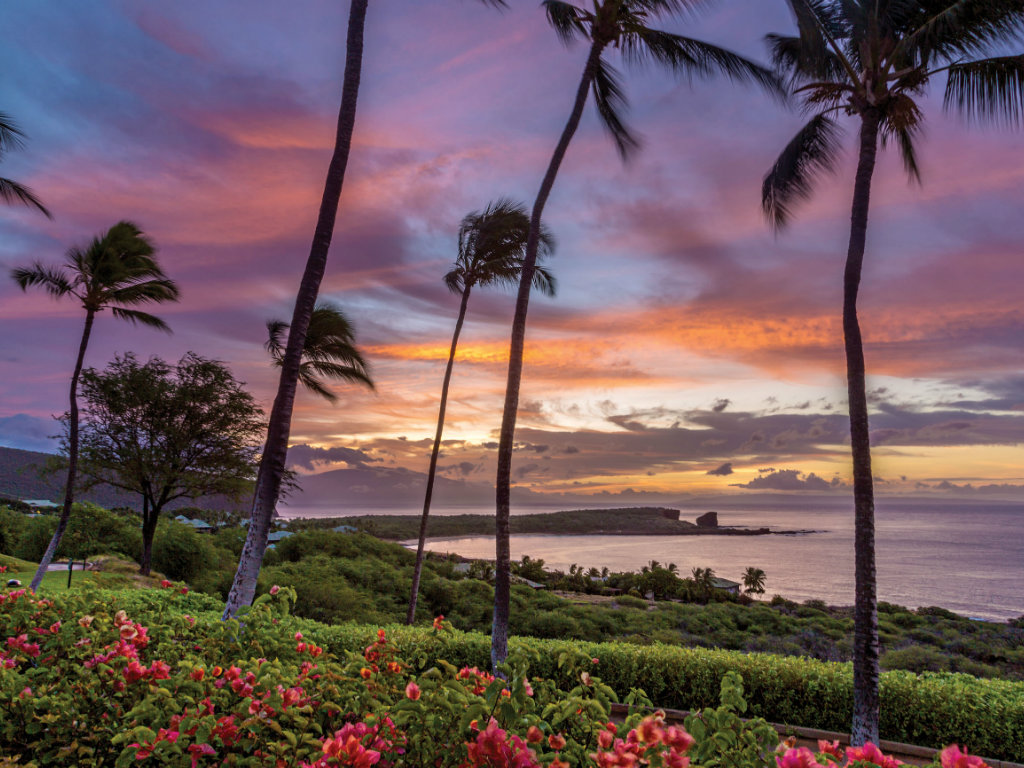 BY JIM BYERS
On Lanai, they’re putting the finishing touches on a multimillion-dollar remake of the old Four Seasons Lodge at Koele, which is being turned into a sumptuous spa and wellness retreat. Rooms at its sister hotel, Four Seasons Lanai (above), start at about $1,150 a night.
Teams of gardeners wander the tidy streets that border Dole Park in Lanai City, picking up white and yellow plumeria that have tumbled to the ground and trimming the grass around the restored movie theater, which has a lawn lush enough to make an Augusta National greens-keeper weep with envy.
Some 98 percent of Lanai is owned by Larry Ellison, cofounder and executive chairman of Oracle. His Lanai restoration team, called Pulama Lanai, has 400 workers on the payroll and is working to restore fishponds and replant forests ravaged by wild deer and goats.
Ellison’s team has rebuilt the theater, opened a posh new public swimming pool, built a fancy basketball court for Lanai’s only school, and is constructing 10 massive hydroponic gardens to reduce the reliance on imported food.
Nine miles away on Molokai, the Kaluakoi Resort has been shuttered for more than a decade. Shrubs and small trees sprout from what used to be a pristine 18-hole golf course. The Lodge at Maunaloa is also closed. Both belong to Singapore-based GL Ltd., the owner of Molokai Ranch. GL Ltd. ceased all resort operations on the 55,000-acre property more than a decade ago. The decision stemmed from being denied permission to build a 200-lot luxury development on 500 acres at La’au Point.
(In 2017, GL Ltd. listed Molokai Ranch with Scott Carvill of Carvill Sotheby’s International Realty for $260 million. At press time, however, the ranch was no longer listed for sale at Carvill’s website.)
The ferry that brought passengers to Molokai from Maui stopped running a few years ago. You can only get to Molokai by air or private boat now. Scattered about the island are signs that suggest visitors are welcome for a spell but that locals hope it’s not permanent.
The Molokai Land Trust has just four full-time workers compared to Pulama Lanai’s 400. The trust relies on its staff and volunteers to do vital environmental work, including clearing Molokai Land Ranch property of invasive kiawe trees that compete with native species.
When I visited Molokai two years ago, I sat at the Hotel Molokai one morning and gazed at Lanai, thinking about the difference in approaches the two islands seem to be taking.
I returned to both islands this summer and found things aren’t as starkly delineated or as simple as I had thought. Not everyone on Lanai is gaga about the direction the island is taking, and not everyone on Molokai is pleased that there’s no longer a resort with a posh golf course or a place for a splashy dinner.
These neighboring islands — both ideal for folks looking for the quiet side of Hawaii — are approaching their futures in distinctly different ways.


MOLOKAI SORTS THINGS OUT If you drive east from Molokai’s main town of Kaunakakai, you’ll see a green-and white sign on the side of the road that reads, “Visit. Spend. Go Home.” Farther east, as you near the pristine Halawa Valley, you’ll see another handwritten sign. This one, in part, advises visitors that “Aloha is not an invitation to move here. Respect Molokai and her people.”
“Those signs do not represent Molokai,” says Jule Kamakana, who runs the Kamakana Country Store outside Kaunakakai. “A lot of people wish those signs weren’t there.”
Sitting under a wind-whipped tarp on west Molokai, where the Molokai Land Trust is doing a lot of work, project coordinator Josiah Ching tells me he’d be happy if someone renovated the Kaluakoi Resort. “I mean, it’s already there, and it’s not attractive the way it is. Someone a few years ago came in and said they wanted to build a resort and golf course on the southwest tip of the island. That’s sacred land, and people are very much opposed to that. But to redo the resort? I don’t see a problem.”
Ching and others I spoke with said that this lack of trust is partly responsible for the anti-development current on Molokai.
“When Molokai Ranch didn’t get the development they wanted, they shut everything down,” Ching says. “There’s a lot of bad feelings about that, but some people take it to an extreme.”
“The island can’t live without visitors,” says Greg Solatorio, who lives in Halawa Valley and runs cultural tours that include waterfall hikes and talks about Molokai culture. “We don’t want Waikiki. It would be OK if the resort came back, but it would be nice if it was educational. We don’t need more hotels handing out plumeria leis and teaching people to say, ‘Hey, brah.’”
On the other hand, there’s Tuddie Purdy, who runs Purdy’s Natural Macadamia Nut Farm in Central Molokai. “I’m not anti-American, but they stole this land,” Purdy said when I stopped in for a visit. “They took our queen (Liliuokalani) away in handcuffs.”
Putting history aside, Purdy told me Molokai is better protected from overtourism than other Hawaiian islands because its people are more vigilant.
“Too many people want to come and buy two or three houses or build a mansion on the hill,” he said. “And then the locals get priced out.”
CHANGES TO LANAI On Lanai, almost everyone I spoke with is happy with how the island is changing.
“Ellison’s deal to buy the island from David Murdock [the previous majority owner] closed on a Wednesday,” says Mike Carroll of the Mike Carroll Gallery in Lanai City. “Larry announced his plan to fix up the community pool on Friday of that week. What he’s done with Hotel Lanai (the small hotel in town that Ellison owns) and with the swimming pool and the theater and other projects is amazing.”
“You have your critics; every community does,” says Jenna Majkus, who runs Local Gentry in Lanai City. “Murdock was a cash-poor billionaire. But Larry is spending money. I’m the mother of an 11-year-old girl, and he’s put a lot of money into kids’ programs. There are now feeder sports for the high school, which gives my daughter something to do. We never had that before.”
“It’s odd to work for a company where it’s not all about cutting costs,” says Harrilynn Kameenui, a senior vice president at Pulama Lanai. “When we get change orders for work we’re doing, it’s to make things better.”
Kameenui said she’s all in favor of visitation to her island. To a point.
“We don’t want another Oahu. We want to keep things pristine, and we want people to come and be a part of what we’re doing here,” she says.
Of course, not everyone is enamored with the shiny, new Lanai.
One store owner tells me that Ellison has done a nice job of fixing things but that his grocery store, Richard’s, is “way too expensive.”
“Ellison’s just doing this stuff to impress his friends,” another long-time Lanai resident says.
Not everyone shares this opinion regarding Ellison’s motivation.
“All I can tell you is that he’s committed to helping the island become something that can become self-sustaining,” Kurt Matsumoto, the chief operating officer of Pulama Lanai, tells me during a telephone interview.
“Larry is a passionate person, and this isn’t a flash-in-the-pan type of interest. There’s truly a commitment to quality,” Matsumoto says.
“We’re not selling tours where people go plant a tree on the mountain and pay $250 for the privilege. He’s doing the work because it’s the right thing to do,” Matsumoto adds.
A young tour guide showed me around Lanai one morning. She said not everyone can grasp what’s happening on the island.
“It’s maybe not as much as Molokai, but I think there’s still some distrust,” she says. “I’d say people are cautiously optimistic.”
READ MORE

Big news this month out of Washington featuring the Interior Department’s go-forward with the Greater sage-grouse, …

For Sale: Cropland in Eastern Colorado and Western Kansas

Spanning two states, Hudye Farm is the largest dryland and irrigated farm ever to be …

A successful hedge fund manager and dedicated conservationist, Bacon’s 202,000 acres earned him No. 40 …