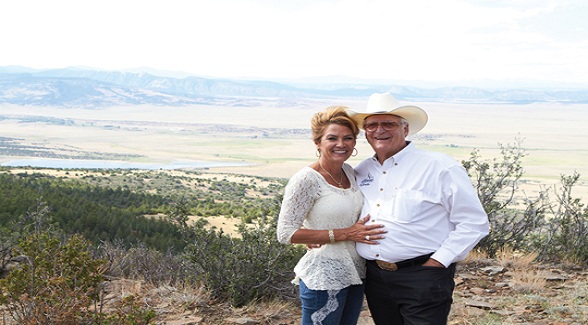 By Eric O’Keefe | Photography by Gustav Schmiege III
The name says it all: The Big Event. Those who have never had the good fortune to set foot in the Express Ranches Sale Barn have no inkling of the beehive buzzing under the big top. In one corner, eager servers tote trays of tri-tip, biscuits, and brownies to buffet tables where more than 400 will break bread in the next 90 minutes. At the shoeshine stand, cattlemen and their brides queue up two and three deep to have their boots given that like-new look. Lording over the entire affair, auctioneer Eddie Sims barks out bids as the price of a half-interest in an Angus cow and her calf soars past $100,000. 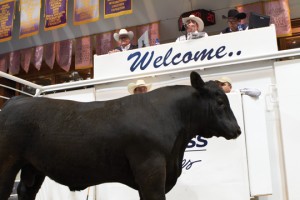 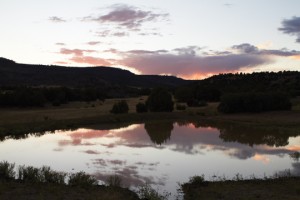 “The UU Bar is more like a state than a ranch,” says former Oklahoma Governor Frank Keating. “You have those alpine meadows, the beautiful forests, the abundant wildlife. It’s absolutely a colorful affirmation of the beauty of America, a spectacular picture-postcard ranch.”
Keating’s wife, Cathy, concurs. Like her husband, Oklahoma’s former First Lady has been a regular at the UU Bar since before Funk bought it.
“We’ve been elk hunting with Bob every year since he bought the Atmore. There’s really just nothing quite like that country out there. It’s just a very special place. You’re in God’s country. I love those moments at the UU Bar – the early morning breakfasts at the lodge that Ralph [Knighton] prepares, driving up to the meadows and waiting for the bugling to start. Then you hear the bugling and the thrill of the chase. I really don’t care if I shoot or not,” she says.
As memorable as a visit to the UU Bar may be, the vast property is an integral element of the Express Ranches portfolio. This multifaceted beef production entity is driven by one goal: better cattle. On a trip to New Mexico, Funk points out that yearling bulls are conditioned on the UU Bar before being taken back to Yukon and sold.
“Jarold likes to tell me we beta test our genetics at the UU Bar,” Funk says, referring to Jarold Callahan, president of Express Ranches. The two teamed up in the mid-1990s when Funk negotiated the purchase of the B&L Ranch and the B&L Angus cow herd near Shawnee from the Oklahoma Cattlemen’s Association Foundation. Up till then, Funk had focused primarily on Limousin cattle. With the purchase of the B&L, Angus cattle became the driver in the expansion of the Express Ranches brand and Callahan was put in charge. “I told Jarold, ‘You sold me these suckers. You come and make them pay,’” Funk says. And that’s exactly what those black-faced cattle have done. According to National Cattleman, Express Ranches is the nation’s largest seedstock operation. Judging from the strong sales numbers at this year’s Big Event, that ranking is safe and secure. 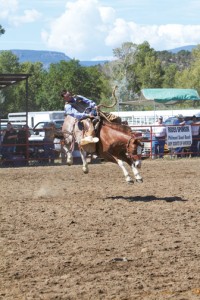 So what does this mean to Bob Funk? It goes without saying that there’s a sense of accomplishment. Back in 1996, he, Callahan, and their team set out to become No. 1, and they’ve done exactly that. It’s the same exact approach that Funk has taken at Express Employment Professionals: putting a team together, setting a high bar, and doggedly pursuing that goal. In three or four years, Express Pros will also be No. 1, Funk tells me.
Bob Funk Jr. is also drawn to the rhythm of the cattle business. His day job may be president of the Oklahoma City Barons, but in the back of his mind are lessons he learned years ago.
Like his father, he insists those lessons be shared. Both men are passionate supporters of the Oklahoma Youth Expo. The organization’s director, Jeremy Rich, tells me that thanks to the Funks, the Expo has gone from near extinction in 2001 to the largest junior livestock show in the nation. I think I know why.
“Growing up in Piedmont, I actually enjoyed working cattle,” Bob Funk Jr. tells me. “Dad used to take me out to feed. It was a hobby, for him and for us, getting up and going to feed the cattle in the morning. It was always fun. It never seemed like work. The best part was really just spending time with Dad.” 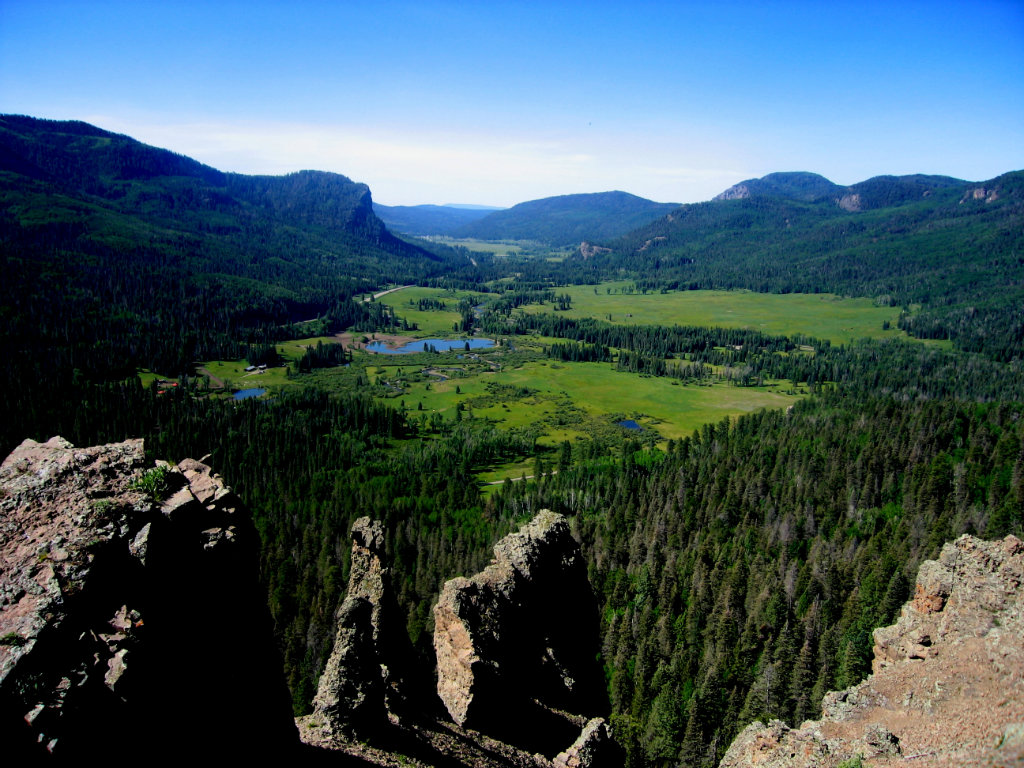 Bill Lane believed in taking the “steeper path to the farther goal.” A visionary with …

Longtime leaders in the sugar cane industry, this family has made restoration of the Everglades …